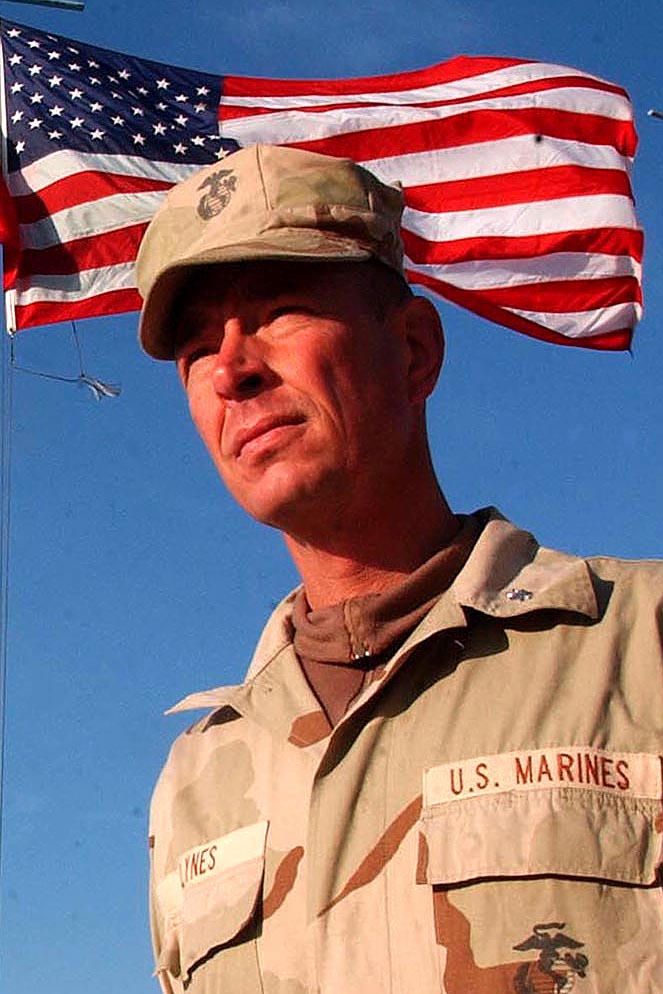 CAMP LEJEUNE, NC- Extraordinary calm fills the voice of LtCol. Jerome Lynes. As Commander of Battalion Landing Team, 3rd Battalion, 6th Marines, LtCol. Lynes is perfectly relaxed. His 1,100 Marines – who comprised about half of the 26th MEU, have shared with him a dear victory.

War has been waiting for LtCol. Lynes. His Eagle Scout badge, his degree in History from Notre Dame, his role as combat advisor to the Royal Saudi Marine Corps and his placement as Co-National Honor graduate of the Naval Command and Staff Course – groomed him to conquer Al Quaida in Afghanistan, at the very least.

His life as a Marine began while in the Navy ROTC at Notre Dame. “My strengths, my interests, were more in line the Marine Corps. I loved the ‘people’ aspect of the Marine Corps. That ignited into a passion to serve her. Shakespeare’s ‘Band of Brothers’ tugs at my heartstrings. I love being a Marine.”

Without missing a beat, the Colonel’s posts on his unit’s web-page depict his positive attitude and patient leadership – before and after September 11 (excerpts below). “A talented BLT Marine named LCpl Mark McDow built the site and maintained it,” the Colonel reports, and each month the Colonel provided a photo and heartfelt status report. The audience was intended to be the families of his Marines, however he reports that the site had over 30,000 visitors between 1 January and 1 April 2002.

1 September 2001
Our Joint Fleet, Supporting Arms Coordination, and Special Operations Capable exercises in August went very well and your Marines and sailors continued their exceptional performance in any task, in any condition. We will deploy to the Mediterranean and 6th Fleet later this month. Watch America’s Varsity shine! Semper Fidelis.

1 November 2001
A hallmark of forward deployed Marine Expeditionary Units is that they are ready at a moments notice to do the Nation’s bidding. The sharp edge gained in our pre-deployment training is kept razor-keen through a variety of training events afloat and ashore.

1 December 2001
As American Marines and Sailors, we are glad to be part of the huge effort to eradicate terrorism. Every member of BLT 3/6 extends their very best season and holiday greetings to all. Sleep well America: we have the night watch.

1 January 2002
Happy New Year from Afghanistan and Pakistan, where the BLT continues to serve as part of Operation Enduring Freedom. We know that we are making a difference, in the last month BLT Marines and Sailors have raised the American flag over our Embassy in Kabul and over Kandahar Airfield, once at the heart of the Taliban’s strength. The later flag was doubly special; it began it’s journey to our positions at Kandahar at the World Trade Center “ground zero” site in NYC. Covered with messages and signatures from New York City’s “Finest and Bravest,” the flag also was first raised on our Navy ships at sea. We are all together; our victory certain.

1 February 2002
As of the above date, we are largely reconstituted aboard our ships; our attention has turned to maintenance and recovery–of equipment, weapons, gear, and ourselves. Our great Navy partners have gone out of their way to “welcome us home.” All are enjoying the luxuries of hot showers, hot meals, racks with clean sheets, and better access to loved ones via phone, e-mail, and letters. That we know we are in the second half of our deployment lifts our spirits; that said, we remain “full of fight” and ready for any task or challenge.

1 March 2002
Our duties will keep us away from home a bit longer then originally scheduled; that said, we are up to the task and our spirits remain high and our purpose keen. As before, this Varsity Team relies on your unwavering support at home. We are all together; our victory certain.

1 April 2002
We are in the last days of our voyage; each day now brings us closer to home. The twin beacons of light at the World Trade Center ground zero site… serves as both a reminder of our motivation over the last seven months and as a light guiding us to our home shores. We are proud to have played our role in the global war against terrorism; appreciative and grateful also for the love and support we have received from you at home. Our re-union is coming; look for us–we will be the camouflaged one with the huge grin and a glad heart!

1 May 2002
Home! That word says it all. It’s great to be here!
This is the last “BLT Update” as the BLT is in its last month as an organization; we will disestablish as a BLT upon our return to the 2d Marine Division at the end of the month. For those leaving us; thank you and we wish you fair winds and following seas.

Home with his wife Mindy, daughter Kate and son Sam, is what really says it all. The day of this interview he and Mindy celebrated their 21st wedding anniversary. Having returned from his seventh long-term deployment, he confides, he never comes home without jewelry. This journey brought her jewelry from Spain and the United Arab Emirates, as well as a hand-made Persian rug.

“She’s much the better part of me. She’s insuring my place in Heaven. If we have heroes in the Marine Corps then we have heroines at home.”

The BLT’s Key Volunteer network of wives were responsible for the lowest number of home front problems, he feels. “There were not less problems,” LtCol. Lynes declares, “as much as they were resolved locally by the wives. Their patience and strength is enormous. I don’t have the words to express my respect for them.”

Kate is a gifted musician studying at the University of North Carolina, and Sam, a junior in high school has an interest in the Corps. The Colonel doesn’t discourage his son, although, “I try not to be a C.O. at home. I try to be Dad. I’ve tried to include my family in Corps things however; Mindy meets me at the Officer’s Club when I go and once she even went on a night training exercise. I’ve brought my daughter to the Birthday Ball, and Sam has spent many a day with Dad at work from about the time he was five!”

He has been selected for full-bird Colonel so his tenure is not up yet. His thoughts about life after the Corps are still fluid, but expects to work with people. “So much of leadership is getting inside people’s heads and helping them to achieve goals.”

LtCol. Lynes’ heart is at home and the Corps is his core. “The Marine Corps is definitely a filter I look at the world through. Unless lightening strikes, I’m happy to just be doing what I’m doing.”

Editors Note: Special thanks to Maj. Wesley Feight for his invaluable contribution to this story.